The following coaches and instructors comprise the ROX player development staff and are involved in coaching each of the ROX teams: 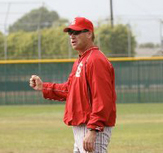