Cooperstown 2006 Opening Day
Opening Day Ceremonies kicked off at 5 pm with the annual update from Lou, owner of the Cooperstown Dreams Park - the same stories and anecdotes for several years, according to ROX president, Michelle - but enjoyed by all.  The Grandparents in attendance were welcomed with yellow Grandpa and Grandma shirts and the parade of 96 teams began. Skydivers added to the celebration and the skills competitions began... ROX fielded a strong slate of competitors in the King of Swat homerun derby (Kohl Webber), Golden Arm throwing competition (Alex King), Roadrunner speed event (Jordan Gisch) and Around the Horn team challenge.  All competitors did a great job, but our own ROX King of Swat, Kohl Webber, advanced to the Homerun derby finals with the top 6 competitors.  In front of a rowdy ROX crowd, Kohl launched the first pitch over the wall and started off well.  He finished with a total of 4 home runs in the overall competition with the final homerun landing in the midst of the ROX faithful in the bleachers.  Coach Scott is still icing his hand from attempting to slow down the rocket blast!  Kohl ended the competition in 4th place out of 96 big hitters!  Way to go, Kohl!!

Sunday, August 6 - Cooperstown 2006 Day 1
Let the games begin!  ROX players were excited to begin pool play and the fans were thrilled with the cool weather (Cooperstown had been experiencing the extreme heat we "enjoyed" in CA a few weeks ago).  The boys actually reported being cold in the barracks at night - not the usual sweating, fly-swatting, locker room humidity, as in the past...

Our first opponents were the tough Michigan Sports Academy. One of their players won the King of Swat Homerun derby, so we knew we would be facing a challenge. Brennan Leitao took the mound and held the big hitters to 5 runs, largely delivered by two homeruns out of the park... size was definitely a factor in this match-up (see photo)... ROX played them tough but came up short, 5-2.

Later that evening, ROX faced the Ramsey Renegades from New Jersey.  Kohl Webber pitched and Jonathan Model hit the first ROX homerun of the tournament to the joy of the ROX fans, but not getting the timely hits resulted in an 8-6 loss in our second outing.

We all headed home to count our bug bites and prepare for a new day - not the start we had hoped for, but the boys are upbeat and ready to play.

Monday, August 7 - Cooperstown 2006 Day 2
ROX began the day with an 11 am meeting with the Houston Sox Silver. They actually draped their section with athletic socks...whatever...Torre tried to find some fellow Texan friends in our opponents but they were only focused on the game.

Jonathan Model took the mound for a tough ROX vs. SOX battle.  ROX led the contest 2-1 but again a lack of timely hitting on our part, offset by timely hits from our opponents, resulted in a 4-2 loss. The coaches took the boys back to the barracks for a "regrouping" before the late afternoon meeting with the Upper Perkiomen Chiefs from Pennsylvania.

The "regrouping" must have worked! Facing the Upper Perk Chiefs, the game was all ROX!  Cole Moeller pitched and hit two homeruns to lead the ROX offense. Jonathan Model added a second homerun in the tournament to his stats and the ROX jumped out to a 6-0 lead.  Kevin Locklear closed out the game, with a final score of 6-1!  The ROX are beginning to roll!

Tuesday, August 8 - Cooperstown 2006 Day 3
This morning we started off early, loaded with coffee and breakfast sandwiches, ready to continue our winning ways against the Lehi Tigers from Utah.  Mike Mohammadi started off on the mound for the ROX and the strong hitting Tigers jacked two homeruns over the fence to go ahead 5-1 by the top of the third inning.  The ROX were not willing to accept defeat and a bottom of the third inning, 2 out rally, with 6 consecutive hits by Webber, Leitao, Hoffy, Model, Mohammadi and Gisch and a walk by Whisler, resulted in jumping ahead to a 7-5 lead! Steven Whisler came in to pitch and shut down the Tigers offense for 2 innings and Luke Langdon closed out for the win.  Two in a row - LET'S GO ROX!!!

The ROX were fired up, calm, cool and collected as they walked on the field to take on the undefeated (5-0) Wisconsin All-Stars.  We hear that this is the top team in Wisconsin and there are all kinds of rumors of the $$ it takes to even get a tryout!  They were considered one of the early favorites to win the tournament, but we were not intimidated!!

ROX were up first as the away team, and Cole Moeller drew a walk with two outs and Kohl Webber blasted his first homerun to take a 2-0 lead in the top of the first. 2 runs was the most runs allowed to any of the 5 previous Wisconsin opponents in the tournament prior to meeting the ROX.  Alex King took the mound for the ROX and with tough pitching and defense, we jumped to a 4-0 lead in the top of the 3rd inning.  Wisconsin then took a 5-4 lead with back-to-back "jacks" (homeruns) in the bottom of the third.  Hoffy came in to close out the 3rd inning and pitched the 4th. ROX defense came through with a key out in the 4th with a "suicide squeeze" out at the plate.  Kevin Locklear came in to pitch the 5th inning and made another key out at home (see photo) to keep Wisconsin worried...

ROX continued to battle and we entered the 6th and final inning in a 6-6 tie. Both Wisconsin and ROX fans had loud and rowdy cheering sections with noisemakers, cow bells and chanting fans trying to out cheer each other.  Neighboring teams and staff joined in to watch the final innings of this intense battle.  ROX were unable to score in the top of the 6th and Wisconsin came through with three consecutive hits in the bottom of the inning to win the game, 7-6.

It was a tremendously played game by both teams and Wisconsin was taken to their limit.  The ROX coaches were extremely proud of the boys and their great effort.  We will be the best 2-4 team going into tomorrow morning's final pool play game against the Manchester Cougars.

In their final game of pool play, the ROX beat the Manchester Cougars from Missouri, 5-0, in a strong outing by the team. Kevin Norman pitched a complete game in only 47 pitches and Cole Moeller hit a 2-run homer to lead the offense. Taylor Waterson added a double and a fine running catch in center field to help preserve the shut-out.  ROX finished pool play with a 3-4 record, ranked 51st out of 96 teams.  We received a first round bye and begin play in the single elimination tournament at 4 pm EST on Field #3 against the winners of #55 ranked Clifton Park Pirates (NY) and #56 ranked Encino Vipers (CA).  Our game will be webcast live on the WEBCAM.  Just an FYI - the 4 losses in pool play were to teams ranked #3, #5, #7 and #81 (whoops!) - definitely a tough draw, but hopefully one that makes us tougher than our upcoming opponents.  If we win at 4 pm, we will play #10 ranked Las Vegas Rattlers at 6 pm EST (also on WEBCAM on Field #3) and could play again at 8 pm if we win there (game on Field #4 - no webcam).    Keep cheering on the ROX!!!

It's been an eventful day and a real team effort - many great hits, awesome pitching (a no hitter by Brennan Leitao with 8 strikeouts), amazing defensive plays and monster homeruns… Brennan (2), Cole Moeller (a 3 run blast)!  Cole Murray contributed 2 doubles against the Wolfpack, continuing our momentum.  More details later but now we have to sleep to prepare for tomorrow am.

We are so proud of our boys and hopefully our next update will have us advancing to the Elite 8 and beyond...we'll keep you posted!!  GO ROX!!!!

Friday, August 11 – Cooperstown 2006 Day 5
ROX fall 11-8 to #26 St. Louis Jaguars from Missouri.  The boys were up early and ready to go for Thursday morning's Sweet 16 game against the Jaguars.  A 2-run homer by Cole Moeller in the first inning started the ROX off with a 2-0 lead which was quickly matched by a Jaguar 2-run homer.  It was a hard-fought game, with ROX down 11-2 and fighting back with 2 outs in the top of the 6th inning - ending in a final score of 11-8. The six run rally was driven by back-to-back homeruns from Kohl Webber  - a GRAND SLAM home run! - and Brennan Leitao, among other offensive highlights!  The kids were in it until the end and the ROX were the talk of the barracks for their great play in the tournament.    Closing ceremonies saw some light rain (the first of the week!!) but the boys were inducted into the American Youth Baseball Hall of Fame and got their Hall of Fame rings.  The final game of the tournament saw the #6 Texas Tarheels upset the #1 Virginia Crush Orange, 7-2, for an exciting finish to the week.  Everyone's packing up and heading home now...see you back in Irvine! Travel safely and plan ahead for those long security lines...   see you next year in Cooperstown!!

Congratulations on 12 team homeruns for the week! 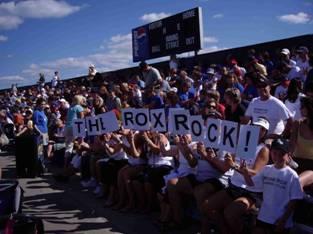 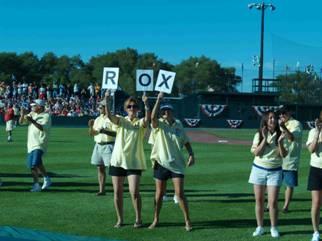 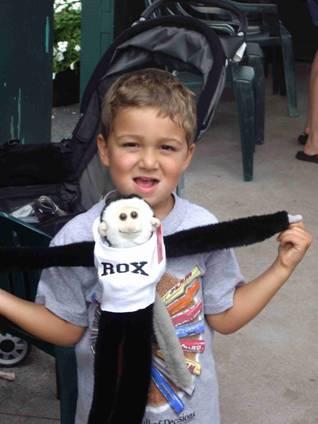 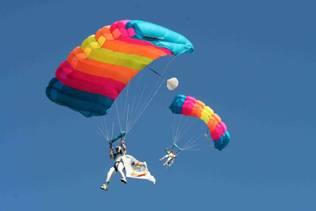 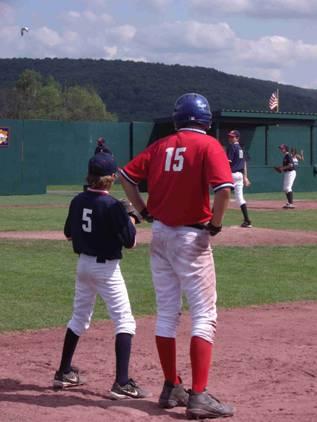 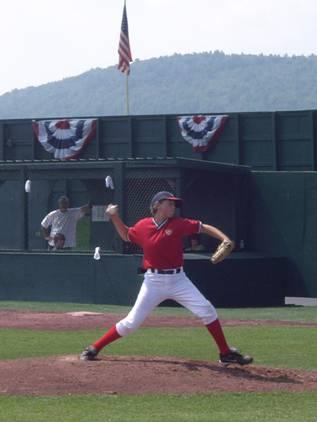 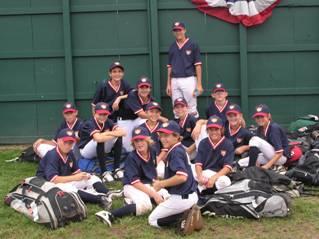 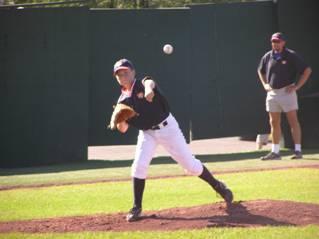 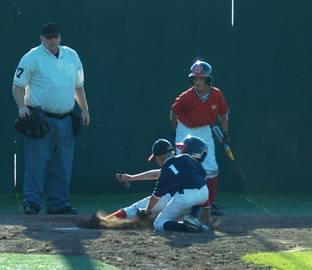